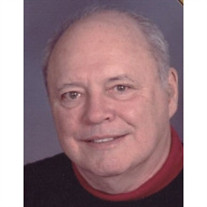 Wayne Alvin Barner, age 83, entered eternal rest on March 19th, 2021 in Lancaster, Pennsylvania. He was surrounded by his loving family and entered God's presence peacefully. Wayne was born on August 25th, 1937 in Aaronsburg, PA, the only son of Esther Krape Barner and Charles Lee Barner. He was happily married to Helene Mary Barner (née Schumacher), his wife of 59 years, on June 13th, 1962. Wayne enlisted in the USMC in 1956 after he attended USMC recruit basic training at Parris Island, SC. While on active duty, he was selected to attend the Naval Academy Preparatory School as a Midshipman Candidate and entered the United States Naval Academy as a Midshipman in 1958. In June 1962, he was commissioned as a 2nd Lieutenant in the USMC and attended several specialized training schools, including Field Artillery Training in Fort Sill, OK. Following his promotion to 1st Lieutenant, he deployed to Vietnam during the Vietnam War. Wayne attained the rank of Captain and was discharged from the USMC on June 30th, 1967. He was employed by the IBM Corporation as a Systems Engineer until his retirement in 2002. He was an avid computer-based genealogy researcher and worked very closely with the Adam Barner Family genealogy and reunion committees. Until moving to Lancaster in 2012, he was actively involved with the General Smedley D. Butler Detachment (#741) of the Marine Corps League, where one of his responsibilities was to coordinate military honors and perform honor guard duties at funeral services for other Marine Corps veterans. Wayne is survived by his lifelong soulmate and loving wife Helene; three sons Charles (Marilou) of York, PA, Kevin (Susan) of Annapolis, MD, and Michael (Kimberly), of Portland, OR; five grandchildren Sarah Barner (David) of San Francisco, CA, Gale Mercado of York, PA, Janel Ruhe (Mathijs) of Zwolle, Netherlands, Ryan Barner of Annapolis, MD, and Larissa Jewel Barner of Annapolis, MD; and one great-grandson Draco Mercado. Wayne will be interred at Saints Peter and Paul Cemetery in Springfield, PA. A memorial service and mass will be scheduled in the near future. A loving husband, father, grandfather, great-grandfather, and friend, Wayne will be sorely missed by an entire community of family and friends.

The family of Wayne Alvin Barner created this Life Tributes page to make it easy to share your memories.

Send flowers to the Barner family.