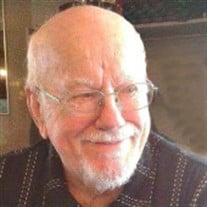 Stanley Thurman Beaver, 89, of Secane, PA, formerly of Philadelphia and Morton, PA, passed away peacefully at his home on February 22, 2017. Mr. Beaver was born on February 17, 1928, in Wilburton #2 in Columbia County, PA.  At 14, his family moved to Southwest Philadelphia.  He played clarinet and guitar in the John Bartram High School band and was graduated in 1945. Mr. Beaver entered the US Army in 1946 and was honorably discharged in 1948.  He married the former Estelle Suplee in 1949, and they were married for 60 years at her death in June 2010. Mr. Beaver was employed as a machinist at the Sunoco Refinery in South Philadelphia for 45 years and retired in 1992. Mr. Beaver enjoyed hunting, fishing, bowling, and golfing.  After retirement, he loved spending time in his seashore home and traveling throughout the US in his motorhome with his wife, Estelle. Mr. Beaver sang bass as a member of the Delchordians and the Bryn Mawr barbershop choruses of SPEBSQSA.  He also sang in too many barbershop quartets to name, including those with his son Richard, as well as a gospel quartet with his wife Estelle, son Richard, and daughter Linda. Mr. Beaver is survived by his wife, Charlotte, his daughters Linda Beaver and Judith Wiedman (Robert), sons Richard (Marilyn), Randolph (Eileen), and David (Maria), his grandchildren Gregory, Justin, Allison, Nicholas and Luke Weidman, as well as many nieces and nephews. He is also survived by his brother Gerald (Ruthann) of Elverson , Pa.  He was the stepfather of the late Tracey Fogel Dougherty (Steven) and the beloved step-grandfather of Justin, Meghan, and Mellissa of Collingdale PA.  He was the step grandfather of Adam (Dan), Louis, Timothy and Dorian (Victoria) Bridglal, and the step great-grandfather of Sophia. HE WILL BE DEARLY MISSED BY ALL WHO KNEW AND LOVED HIM. Interment will be private. Relatives and friends are invited to his visitation on Saturday, March 4, 2017 after 1:30 PM at the Kovacs Funeral Home, Inc., 530 W. Woodland Avenue, Springfield, PA 19064 until the time of his funeral service at 2:30 PM. The family would appreciate memorial gifts in his memory be sent to the American Diabetes Association, 150 Monument Rd., Suite 100, Bala Cynwyd, PAA 19004.

Stanley Thurman Beaver, 89, of Secane, PA, formerly of Philadelphia and Morton, PA, passed away peacefully at his home on February 22, 2017. Mr. Beaver was born on February 17, 1928, in Wilburton #2 in Columbia County, PA.  At 14, his family... View Obituary & Service Information

The family of Stanley T. Beaver created this Life Tributes page to make it easy to share your memories.

Send flowers to the Beaver family.