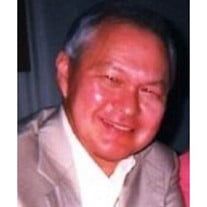 Richard P. Papas Engineering Technician Mr. Richard P. Papas (Rick), 83, passed away on September 15, 2016, at his home in Smithville, NJ.  A former resident of Sharon Hill and Springfield, PA, Rick and his wife, Jackie retired and moved to Smithville, where they lived for the past 17 years. Born in Philadelphia, Rick was a 1950 graduate of Northeast High.  He then served in Alaska for the Armed Forces from 1953 to 1955.    He became a member of the Catholic War Veterans and the American Legion. Rick worked as a civilian engineering technician for the Frankford Arsenal, Bridesburg section of Philadelphia until its closure in 1977, the Philadelphia Naval Yard until 1989 and NDI Engineering Company until his retirement in 1992. Rick is survived by his wife, Jacqui (nee McMenamin), sisters Florence Hedges and Patricia Tully and predeceased by brother, Francisco.  Rick is also survived by daughters Mariann (Paul) Gibson, Theresa (Brent) Ashcraft, Kathleen Papas and son, Rick Papas.  He was predeceased by a daughter, Jackie.  Rick is also survived by his 3 grandsons, Andrew, Jeffrey and Jace, granddaughter, Jaclyn and great-grandson Samuel. Rick was a gentle man with a warm smile, whose favorite past-times were golfing, watching all sports and gambling on the Wheel of Fortune machine in Atlantic City's Harrah's Casino.   He coached basketball for the CYO in his younger days as well. Rick's family wishes to gratefully acknowledge the wonderful care and companionship he was provided by the people at the Fresenius Dialysis Center of Galloway during his nearly five years of treatment. Relatives and friends are invited to Rick's viewing on Tuesday, September 20, 2016 after 9:00am at the Kovacs Funeral Home, Inc., 530 W. Woodland Avenue, Springfield, PA  19064, followed by his funeral service at 10:00am. Interment will be in SS Peter & Paul Cemetery, Springfield, PA. In lieu of flowers, donations may be made to the Army Emergency Relief Fund (www.aerhq.org), or write to: Fort Dix Army Emergency Relief 5428 Delaware Ave, Room 3 Fort Dix, NJ 08640-5130 Tel:  (609)562-4245 Viewing: 530 W. Woodland Ave. 530 W. Woodland Ave., Springfield, PA, 19064 Visitation , 09/20/2016 - 9:00 am to 10:00 am

The family of Richard Paul Papas created this Life Tributes page to make it easy to share your memories.

Send flowers to the Papas family.