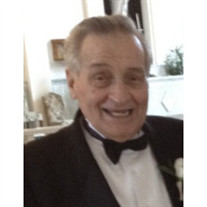 Philip Edgar Martelli Philip E. "Pops" Martelli, age 87, of Lansdowne, died on February 6, 2019 at home. Phil was born in Chicago, Illinois on June 24, 1931 to Edgar and Rose (DiCarlo) Martelli. He graduated from John Bartram High School in 1949. Phil married Mary Jane McCormick on November 28, 1953. He served in the United States Air Force during the Korean War. Philip worked as a chemist assistant at E.I. DuPont in Gray's Ferry for 42 years until his retirement in 1996. During his time working at E.I. DuPont, he only missed one day of work. He was a devoted parishoner of Saint Philomena for 53 years. There he attended daily mass and 7:30 mass on Sundays. Phil was an religious man who lived his faith as an inspiration to God and his family. Phil possessed an unwavering, faithful passion for Saint Joseph's University Men's Basketball program. He attended practices daily and traveled with the team for away games and tournaments. At games he could be found with his fist raised in the air to support the team. Phil was an avid golfer. He was a longtime member of DuPont Country Club. He golfed on weekend days and belonged to a Monday night golf league. His greatest devotion was to his large loving family. A quiet man he enjoyed the boisterous times when his children, grandchildren, and great grandchildren would visit. Phil is survived by by his children Phil Martelli (Judy), Marianne Martelli, Rosemarie Kehoe (Tommy), son-in-law Larry Phillips (the late Pattiann), Stephen Martelli, Christine Castagna (Joe), and Lisa Haney (Bill). He was the loving Pop to 17 grandchildren and 18 great grandchildren. He was predeceased by his cherished wife of 64 years, Mary Jane, as well as his children Michael James Martelli and Pattiann Phillips. Phil was also predeceased by his brother Thomas Martelli. Friends and relatives are invited to pay their respects on Sunday, February 10 from 5:00 to 8:00 P.M., and from 8:30 to 10:00 A.M. on Monday morning February 11 at Saint Philomena Church, 41 East Baltimore Avenue Lansdowne, Pennsylvania 19050. His funeral mass will follow at 10:00 A.M. Interment will be in Holy Cross Cemetery, Yeadon, PA. Memorial gifts may be made to Camilla Hall, 1145 King Road, Box 100, Immaculata, PA 19345.

The family of Philip E. Martelli created this Life Tributes page to make it easy to share your memories.

Send flowers to the Martelli family.