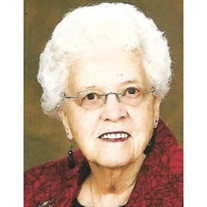 On Wednesday, December 30, 2020, Mavis Berdan, loving wife, mother and grandmother, passed away at the age of 97. Mavis Louise Preston was born on January 15, 1923 in Rutherford, New Jersey. She overcame Perthes' disease, earned a diploma from the Dietary Institute of America in New York City, and worked in an aircraft-engine factory. She and Frank Berdan, Jr. married on November 22, 1942 at Archer Memorial Methodist Church in Allendale NJ. They settled in Springfield PA and raised Frank, 3rd, Ruth, and Maribeth. Mavis also loved needlework and music. She sewed much of the family's clothing, made braided rugs, knitted and took in alterations for others. She and Frank were longtime members of Covenant United Methodist Church. She was a member of the Chancel Choir for over 60 years and served on many committees. She also was a member of the Women's Club of Springfield and the Lioness Club. As an empty nester, she and six friends ran the House of Yarn store in Media for 11 years. Mavis moved to Lima Estates in 2005, a year after being widowed. She enjoyed the singing in the chorus, the Knifty Knitters and playing pinochle and dominoes. During the pandemic, her children kept in touch daily by telephone and visited as allowed. She died peacefully following a mid-December stroke. Mavis was preceded in death by her husband Frank, Jr.; her parents, Harold and Marion Preston; and two sisters, Janice and Marion. She is survived by her son, Frank "Skip" Berdan III (Kathi) of St Paul, MN, Ruthie von Minden of Springfield, PA, Maribeth "Meg" Ramberg (Rick) of Ocala, FL; grandson, Richard "Richie" von Minden of Las Vegas, NV; and seven nieces and nephews and their families. All Services have been cancelled at this time and no plans have been made to reschedule. In lieu of flowers, please make donations in her memory to the Memorial Fund of Covenant United Methodist Church, 212 W Springfield Rd. Springfield, PA 19064.

On Wednesday, December 30, 2020, Mavis Berdan, loving wife, mother and grandmother, passed away at the age of 97. Mavis Louise Preston was born on January 15, 1923 in Rutherford, New Jersey. She overcame Perthes' disease, earned a diploma from... View Obituary & Service Information

The family of Mavis L. Berdan created this Life Tributes page to make it easy to share your memories.

Send flowers to the Berdan family.