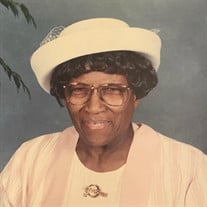 In Hartley, Delaware on April 16, 1922, Martha Elizabeth Young was the youngest of six siblings born to Martin Steamer Gibbs and Dorothea Elizabeth Ware-Gibbs. On Monday evening, December 6, 2021, she went home to be with the Lord. Growing up in the country, Martha’s educational opportunities were limited to a segregated one-room schoolhouse as she was too young to attend but was taken along with her only sister, the late Rebecca Daniels, and brothers to attended school. Martha learned quickly and memorized everything she was exposed to. Martha became very ill at the onset of her high school years and could not complete her education. It took several years to regain her strength but she then began working with her mother as a domestic housekeeper, eventually moving to Chester, PA to assist her sister in rearing her ten children. Martha began working at Crozer-Chester Medical Center and then at the Williams Funeral Home, where she worked for over thirty-five years and other various places in the greater Philadelphia area to complete a week. Martha was baptized in Jesus’ name and filled with the Holy Ghost in her youth and worked diligently in the service of the Lord under the ministry of the late Bishop Wallace E. Young. They married and she served with him for over thirty years at the Holy Church of the Lord Jesus Christ of the Apostolic Faith. She, in different auxiliaries, as a choir leader and pastor’s wife, was an example of a true woman of God. Two daughters came from this union, Bathsheba and Myrna. Martha was a thirty-nine year survivor of breast cancer, which was diagnosed just after the loss of her husband. This didn’t stop her as she became actively involved in various church auxiliaries and senior activities that kept her busy until nationwide restrictions were implemented. She had many talents, as she was a seamstress, sewing her own wedding dress and other beautifully tailored outfits. Martha exhibited a very creative side with her interest in arts and her ability to draw, paint and produce ceramic creations, that were often featured in public city-wide venues. She participated in many of the Southwest Senior Center’s events, becoming a popular student in Spanish and Bible classes as well as expressive movement and aerobics workout classes. Martha oversaw the gardening upkeep of the facility as she loved cultivating flowers and plants. Her knowledge of many things and witty personality was a motivating factor that pushed her towards desiring to obtain her high school diploma. Martha was a committee member for the Cobbs Creek Community Environmental Center, where she tested water samples for purity for the City of Philadelphia. Martha had a very hardy appetite and loved to eat and travel, visiting area museums, attending day trips and loved helping and giving to others in all aspects. Martha was also a member of the Pentecostal Bridegroom Temple where she was part of the nursing aid unit, a senior choir member and one of the eldest mothers of the congregation. There was a special affection shown by Deacon Herb, (now deceased), Deaconess Phyllis Allison, whom would make sure that Mother Young would get to service and Sister Ethel Flanagan, “Her Nurse,” as she was referred to, would also accompany Mother Young in traveling to church. Martha is the last of the Gibbs siblings and leaves to mourn her tremendous loss, two daughters, Bathsheba L. Davis (Glen), Myrna J. Coleman (Ronald), eight grandchildren, Anré (Christy), Erica (Justin), Aaron, Alicia, Aric, Elise, Enid and Eaden, five great-grand children, Gavin, Reagan, Christian, Dominic and Christopher and six nephews, John (Geraldine-now deceased), Marvin (Sondra), Wallace, Ronald (Joan), Michael (Henrietta), Mathias (Cheryl), and one niece, Dr. Karen E. Daniels-Mitchel (Floyd), a host of great nieces, nephews, church family and friends.

In Hartley, Delaware on April 16, 1922, Martha Elizabeth Young was the youngest of six siblings born to Martin Steamer Gibbs and Dorothea Elizabeth Ware-Gibbs. On Monday evening, December 6, 2021, she went home to be with the Lord. Growing... View Obituary & Service Information

The family of Martha E. Young created this Life Tributes page to make it easy to share your memories.

Send flowers to the Young family.