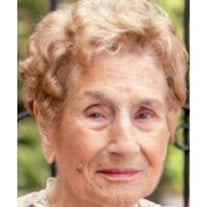 Marian C. "Toni" Gordon Homemaker Mrs. Marian C. (nee Lutton) Gordon, 99, died on May 9, 2017, in Springfield, PA. Mrs. Gordon attended Norwood School and was a resident of Springfield for 56 years.  She was a member of C.C. Hancock Memorial United Methodist Church in Springfield where she enjoyed donating time to the church and cooking for various church activities.  She was devoted to her family. She is survived by her husband of 68 years, Jacques Gordon, three sons; Joseph "Jay" Gordon of Corralitos, CA, Jacques Gordon III of Devon, PA, and Michael Gordon of Washington, NH; three granddaughters, Melanie, Laura and Stacey, two grandsons, Jackson and Stewart and two great-grandchildren, Paige and Pierson.  She was predeceased by her daughter, June Gordon, in 1980. Relatives and friends are invited to her viewing on Friday, May 12, after 10:00 AM at C. C. Hancock Memorial United Methodist Church, 542 Wesley Road, Springfield, PA 19064 followed immediately by her funeral service at 11:00 AM. Interment will be in Edgewood Cemetery, Glen Mills, PA. Donations in her memory may be made to the church named above.

The family of Marian C. "Toni" Gordon created this Life Tributes page to make it easy to share your memories.

Send flowers to the Gordon family.