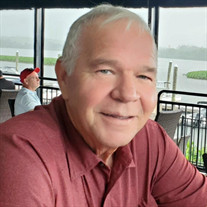 John T. Zahner, 65 a resident of Drexel Hill passed away on October 17, 2021. John was born in Philadelphia to the late David and Florence (Charlton) Zahner, the 4th of 5 sons. He was a 1974 graduate of Upper Darby High School. John enlisted in the United States Navy which took him to the Great Lakes where he served as his company's R-POC. Then on to San Diego, Virginia Beach and Newport , RI where he served as a radioman aboard the USS Damato DD871. John was a hard worker who held many different occupations - a copier repairman, food distributor for Sunshine Cookies, a proud entrepreneur of Wings to Go in Broomall and Upper Darby, and a security guard for Cabrini University. His most satisfying work was when he worked side by side for the past 20 years with his brother Tom for Upper Darby Township as the Superintendent of Sanitation Department, where he retired in September 2020. John married his childhood sweetheart Kathy (Doud), who he fell in love with at first site, on June 4, 1977, and absolutely loved her. They were blessed with two sons, Jeremy and Josh who he adored and raised in Drexel Hill. John was a people person who always made time for family and friends, new and old. John was a loving son, husband, father, brother, uncle, and loyal friend who will be dearly missed by all who knew him. John was community minded serving as a Committee Person and served on the Board of Directors at Clifton Heights Swim Club. He was a volunteer Fireman at a young age and currently served on the Delaware County Fire/Police Association. John loved to cruise the open roads, was a lover of Western movies especially with his hero John Wayne, and musicals. If you know John you surely heard him sing the songs of Les Miserables. John bravely faced many medical challenges including being a cancer survivor and never complained. He was a man of great Faith who loved the Lord and now is pain free and in the presence of his Savior. Survived by his wife; Kathy (Doud) Zahner, children; Jeremy, and Josh, brothers; Bill (Rosemary), Tom (Irene), brothers-in-laws Jim Doud (Terry), Don Doud (Janet) and many, many cherished nieces, nephews, and grand nieces/nephews. He is predeceased by his parents and brothers David (Gerry) and Jim (Diana). Visitation: Wednesday 6:00 PM at Williams Lombardo Funeral Home 33 W Baltimore Ave. Clifton Heights. Funeral Service: Wednesday 7:00 PM at Williams Lombardo Funeral Home Interment: Private In lieu of flowers donations in John's honor can be sent to Jefferson Hospital Cancer Research cancercenter.jeffersonhealth.org/giving.html Condolences: www.lombardofuneralhomes.com

John T. Zahner, 65 a resident of Drexel Hill passed away on October 17, 2021. John was born in Philadelphia to the late David and Florence (Charlton) Zahner, the 4th of 5 sons. He was a 1974 graduate of Upper Darby High School. John enlisted... View Obituary & Service Information

The family of John T. Zahner created this Life Tributes page to make it easy to share your memories.

John T. Zahner, 65 a resident of Drexel Hill passed away on October...

Send flowers to the Zahner family.