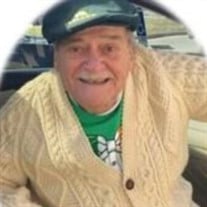 John R. Wells, Sr. "Jack", 89, on October 6, 2021 at home surrounded by family as was his wish. He was born March 24, 1932 on Glencoe Road, Upper Darby. Jack was a lifelong member of St. Cyril’s parish having gone to school and raising his family there. He met his wife Rosemarie (nee Reilly) in 1954 and they married in 1955 and moved from Stonehurst Hills to East Lansdowne where they still reside. Jack “Pop” “Pappy” is survived by his wife of 66+ years, Rose, his children, Rose Marie (Bunny), Joanne (Michael) Nichols, Jake (Gladys), Michael (Linda), Mary Beth, Judy (Tom) Murrin, Chrissy (Brandon); grandchildren Aimee, Melissa, Michael, Thomas, Christopher and Ryan Elizabeth, great grandchildren Michael III, Ariyana, Emma and Jack as well as his sisters Rose Marie and Joan, many nieces, nephews and friends. He will be reunited with his daughter Kathleen, grandchildren, Michael II and Keri as well as his parents, William Henry & Marie (nee Burns) and siblings, William, Katherine and Ruth. Jack served in the United States Air Force during the Korean Conflict and later the National Guard. Jack had many careers to support his family, milk man, plumber, insurance agent and as a member of the Carpenters Union Local 845 from which he retired. Jack loved life and spending time with his family and friends. He coached 69th Street AA and EL Little League and was the biggest supporter and loudest fan for all of his “kids and grands” events. His bag was always packed for the next adventure to the Jersey shore, Maryland, casino, softball and volleyball tournaments, regattas, bike week and whatever destination you had in mind. He wanted to be on the first ride out and last one home. When asked his ancestry Jack would say he was Heinz 57 but no one was more Irish than he especially on St. Paddy’s Day. Pop taught us many life lessons the most important which was family first and always treat others as you wish to be treated. Every day was a good day! He made everyone he met feel better about themselves with his words, smile and hugs. Relatives and friends are invited to visitation on Friday, October 15, 2021 from 6:30 to 8 pm at Williams Lombardo Funeral Home, 33 W. Baltimore Pike, Clifton Heights and on Saturday, October 16, 2021 at 9 am at St. Pius X Church, 220 Lawrence Road in Broomall followed by Mass at 10:30 am. The mass will be live streamed. Interment at SS. Peter and Paul. In lieu of flowers donations in Jack’s honor are requested to Disabled American Veterans, the charity of your choice or as Dad would say pay it forward. The Wells’ would like to thank family, friends and Jack’s caregivers from Main Line Health HomeCare & Hospice for your support, prayers and well wishes during his time at home.

The family of John R. Wells Sr. created this Life Tributes page to make it easy to share your memories.

Send flowers to the Wells family.