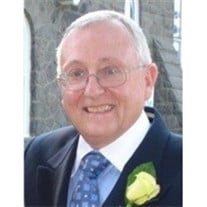 John W. Kulp, 71, of Media, PA, passed away on July 7th, 2018. He passed peacefully surrounded by his family. His beloved wife Barbara Ann, daughter Jennifer, son John, his wife Johanna, and grandchildren Adelyn, Blaine, and Isaac survive him. John was born in 1947 in Darby and raised in Springfield. He graduated from Springfield High School and Emporia State University in Kansas where he majored in economics. John was a longtime resident of Media, PA, where he raised his family. He was an employee of Beneficial Savings Bank, where he was an assistant vice president. After his career at the bank, John drove a school bus for Rose Tree Media School District. John loved the Lord and was a faithful member of Reformation Lutheran Church for almost 30 years. He served on many committees and sang in the choir. John was a member of The Springfield Lions Club, where he served a term as president. He enjoyed the camaraderie and charity work. John was a car enthusiast. He joined the County Corvette Association, along with Barbara, and his prized 1984 Corvette. With this club he and his wife traveled, participated in parades, and went to car shows. John was a Philadelphia sports fan and was thrilled to watch the Eagles win the Super Bowl this past February and the Phillies win in 2008. John, also known as Pop Pop, loved spending time with his grandchildren. Pop Pop doted on them, spending many afternoons giving them tractor rides, reading books, watching movies, taking trolley rides, and playing cars. John was an avid photographer. He spent years behind the camera capturing the moment. John and his wife Barbara enjoyed many trips to New England, with Rockland, Maine, being their favorite. John had a wonderful life filled with faith, family, and friends. Relatives and friends are invited to his visitation on Friday, July 13, after 9:30 AM until the time of his funeral service at 11:00 AM at the Reformation Lutheran Church, 102 W. Rose Tree Rd., Media, PA. Interment in Glenwood Cemetery, Broomall, PA. In lieu of flowers, please send memorial contributions in his name to Reformation Lutheran Church.

The family of John W. Kulp created this Life Tributes page to make it easy to share your memories.

Send flowers to the Kulp family.