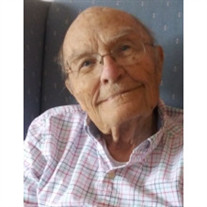 John P. Gibson Mr. John P. Gibson, 93, died on June 10, 2019, at his home in Media, PA after a brief illness. Born in Philadelphia, PA, Mr. Gibson was a graduate of West Philadelphia High School and later attended Pierce Business School. He and his wife, Marion, resided for 50 years in Springfield before moving to Media 12 years ago. He was employed by the National Liberty Life Insurance Company and the Philadelphia Life Insurance Company for many years. He was active in many aspects of insurance, especially information technology. John was a devoted member of First Presbyterian Churchof Springfield and served the church in many capacities. He was an avid sportsman and enjoyed playing tennis, ping pong, bowling, basketball, baseball, swimming and skiing. He loved the beach. However, his most precious time was spent with his family. Johnwas a kind and compassionate person, with a great sense of humor, and he lived life to the fullest. He was loved by many and will be deeply missed. He is survived by his wife, Marion B. (Vanderslice) Gibson, two sons, Jack (Mayra) Gibson and Brian (Wilann Spiccia) Gibson, and a daughter, Patty March. He is also survived by 6 grandchildren, Caitlin and Kelley, Henry and Marty, Julia and Evan, and 3 dearfriends, Jane Edwards Gibson, Jannie Davidson Sirkin and Fran Healy. He was predeceased by a son-in-law, Michael March. Relatives and friends are invited to his visitation on Saturday, June 22, 2019, after 10:00 AM at First Presbyterian Church of Springfield, 356 Summit Road, Springfield, PA 19064, followed by his funeral service at 11:00 AM. Inurnment will immediately follow in the church's memorial garden. A luncheon celebrating his life will be held following inurnment in the church's Fellowship Hall. In lieu of flowers, memorial gifts may be made to the First Presbyterian Church of Springfield at the above address.

The family of John P Gibson created this Life Tributes page to make it easy to share your memories.

Send flowers to the Gibson family.