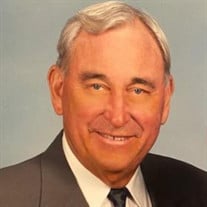 Jack M. Schreffler, 90, of Glen Mills, went home to be with his Lord on Sunday, February 20th, 2022, while on hospice with Penn Medicine Hopsice at Chester County Hospital in West Chester. He was born May 3, 1931, in Shamokin Dam, a son of the late Thaddeus and Anna (Butcosk) Schreffler. On July 9, 1954, he married the former Joyce Ann Hoffman who predeceased him. He soloed his first airplane at age 15 and owned 9 different planes over his lifetime. He flew his family all around the country, which made for some interesting adventures. He was a member of the Aero Club of PA and lead them as president at one time. He was also a member of the Quiet Birdman Society. He was a 1949 graduate of Sunbury High School. He was a football running back and a pitcher on his high school baseball teams. He graduated from Susquehanna University in 1953 and was on the college golf team and became an avid, lifetime golfer and long-time member of Edgmont C. C. He went on to graduate in 1956 as a Podiatrist from Temple University in Philadelphia. He was the number one college salesman of Wear Ever pots and pans to help pay his way through college. He played tenor saxophone all his life and played in several Big Bands over the years. He last was a member of the RSVP Legends band performing for seniors in Delaware and Chester Counties. He was a successful Podiatrist in Springfield, PA for over 40 years and was once the president of the Pennsylvania Podiatric Society. Jack was the first podiatrist to practice at Fair Acres in Delaware County and was one of the founders of the Temple Foot and Ankle institute in Philadelphia. Jack and Joyce were members of Covenant United Methodist Church in Springfield for over 60 years where Jack sang in the choir and was on the Board of Trustees. Jack was also a Lulu Temple Shriner Mason member of the Springfield Hanby Lodge. Jack loved his family and was most proud of his three children and five grandchildren. Jack and his wife, Joyce, shared fond memories with their family with many trips to Ocean City New Jersey where they were partners in the 59th Street Angler’s Fishing Pier and later at 46th and Central. When they weren’t at the shore, Jack and Joyce would host the family to their mountain home in central Pa along the banks of Penns Creek. Jack is survived by his children: Ken Schreffler and his wife Sheila, daughters Meg Schreffler and Emilie Conover and her husband Herbert; grandchildren, Matthew Schreffler, Katarina Schreffler, Erin Valentine, Quinn Conover and Hunter Conover; Brother George Schreffler and many nephews and nieces. Jack was one of five children including the late Robert Schreffler, Dorothy Ravert and Betty Yordy. Visitation: Saturday, April 9th 9:00am at Covenant United Methodist Church 212 W. Springfield Road Springfield. Service: Saturday, April 9th 11:00 am at Covenant United Methodist Church. Interment: Covenant United Methodist Church. Luncheon immediately Following In lieu of flowers donations can be made to the American Kidney Foundation at https://www.kidneyfund.org. Condolences: www.lombardofuneralhomes.com

Jack M. Schreffler, 90, of Glen Mills, went home to be with his Lord on Sunday, February 20th, 2022, while on hospice with Penn Medicine Hopsice at Chester County Hospital in West Chester. He was born May 3, 1931, in Shamokin Dam, a son of the... View Obituary & Service Information

The family of Jack M. Schreffler created this Life Tributes page to make it easy to share your memories.

Send flowers to the Schreffler family.