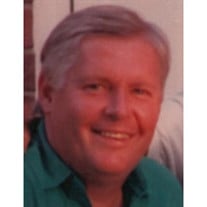 It was an exciting time, living in New York City in the 1960s. George W. Winnemore loved to share stories about that decade when he worked at Pan American World Airways, as well as being a catalog model in the city that never sleeps. "He loved showing people his old headshot photos. He was a very handsome man. He loved talking about the Pan Am days when he would jump on a flight for a day trip to Bermuda. We still have one of his Pan Am luggage bags," said his daughter Amy Winnemore. Mr. Winnemore, 77, who lived in Springfield, died Monday, May 25, 2020 at Riddle Memorial Hospital from COVID-19. Born in Philadelphia, Mr. Winnemore grew up in Colwyn, Pa., and graduated from Darby-Colwyn High School in 1961. Home of the Rams, Mr. Winnemore was a three-sport athlete in high school and was voted Most Athletic in his senior class yearbook. He later spent the summer of 1975 bartending at the Rock N' Chair restaurant in Avalon, N.J., where he met his wife Carol Matt who was there celebrating her birthday. They were engaged by Labor Day and married two weeks before Christmas. They would eventually settle in Springfield, and raise a family. Working in Real Estate and insurance, Mr. Winnemore loved going to Phillies games at the Vet in his spare time. "I once won Prism box seats, along the third base line with a view of Mike Schmidt, at the Vet for a Phillies game. I brought my glove and dad and I sat in the 100 degree heat and enjoyed pretzels and cherry water ices," said his daughter Kimmie. Mr. Winnemore loved spending a warm spring day cheering on his daughters Amy and Kimmie at their softball games. He studied photography and always tried to capture just the right sunset. He never passed up a dessert, especially if it was chocolate peanut butter ice cream. He was a huge fan of the Beach Boys and brought his family to see the group perform at countless concerts. For more than a decade Mr. Winnemore battled dementia, which would rob him of his cherished memories. He would have loved being a grand-pop and playing with his grandsons Jack, 2, and Ryan, 10-months. In addition to his wife, daughters and grandsons, he is survived by his son-in-laws Kevin Henley and John Convery, his sisters Anna Rutland (Dan) and Patricia Lock (Brian), nieces and nephews. To celebrate his life, services will be streamed live through St. Kevin's Facebook at 10:30 a.m. on Tuesday, June 2. https://www.facebook.com/skparish1/ Donations may be made in Mr. Winnemore's name to Providence Animal Center, 555 Sandy Bank Road, Media, Pa. 19063.

It was an exciting time, living in New York City in the 1960s. George W. Winnemore loved to share stories about that decade when he worked at Pan American World Airways, as well as being a catalog model in the city that never sleeps. "He loved... View Obituary & Service Information

The family of George W. Winnemore created this Life Tributes page to make it easy to share your memories.

Send flowers to the Winnemore family.