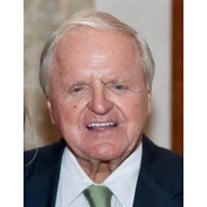 George H. Reuling, Jr. March 31, 1928 ~ October 18, 2020 (age 92) George H Reuling,Jr., 92, died peacefully surrounded by family on October 18, 2020. He was born on March 31, 1928 in Fairview, NJ to the late George H. and Mary McLaughlin Reuling. He spent most of his life residing in Springfield, PA where he raised his family before retiring to Marco Island, FL. George served in the U.S. Navy during World War II. He took great pride in his service and spoke fondly of those days. His patriotism and the love of the Lord lead him to service with the Knights of Columbus where he held the special honor of a Fourth Degree member. George also had a distinguished career as an independent insurance agent for many years. His biggest pride and joy in life was raising his family. He enjoyed watching them grow up and attended all their school and sporting events and carried that tradition on with his grandchildren. He had a love for life and for travel and followed these passions by cruising the world to many destinations. George is survived by children, Deborah Oakes of Swarthmore, PA, Patricia Akers of Naples, FL, Greg and his wife Martha of Groton, CT, Thomas of Henrico, VA and Colleen and her husband Erik DeFreitas of Burke, VA. He was the proud grandfather of 19 beautiful grandchildren and 8 great grandchildren. He is also survived by his brother James Reuling and his wife Renee of Springfield, PA , brother-in-law William Gormley and his wife Mary of Havertown, PA and many nieces and nephews. He was predeceased by his loving wives, Lorraine Huber Reuling and Margaret Duffy Reuling, his son George H., 3rd, and his sister Gloria Gormley. Relatives and friends are invited to his visitation on November 14, 2020, after 10:00 AM at St. Kevin Church, 200 W. Sproul Road, Springfield, PA 19064 followed by his funeral Mass at 11:00 AM. Interment will be in SS Peter & Paul Cemetery, Springfield, PA. Memorial gifts may be made to the American Cancer Society, 1818 Market St., Philadelphia, PA 19103.

The family of George H. Reuling, Jr. created this Life Tributes page to make it easy to share your memories.