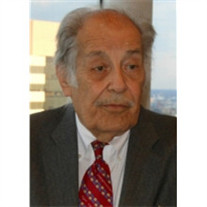 George J. Merva, 88, of Springfield, PA passed away on Friday, March 11, 2016. He was born in Morrisdale, PA to the late Michael and Mary Balogh Merva. George is survived by six children, Mary Ellen Kenworthey, George J. Merva, Jr., Michael Merva, Jean Bulmer, John R. Merva, David Merva; and three grandchildren, Beau Kenworthey, Claire Merva and Grace Anne Merva, and one brother, John Edward ("Ed") Merva. George was oldest son of a coal miner and his wife, and one of 7 children. He enlisted in the Marines towards the end of World War II. After the war ended, he was stationed in Philadelphia at the Navy Yard. He remained in the reserves and went to officer's training, finishing his service as a second lieutenant. He went to college in Philadelphia and graduated from the University of Pennsylvania in 1955, where he met a nurse named Josephine Mariana, whom he later married. They were married for over 40 years when she passed in 1994. They lived in Springfield, PA. In addition to George graduating from the University of Pennsylvania, he was a Staff member of the Pathology Department of the School of Medicine for 58 years, assisting in research administration and the education of medical students during his many years of service. Fittingly for a former Marine, he finally retired from Penn at age 84, on Veteran's Day, November 11, 2011. George enjoyed hunting and camping with his sons at Black Moshannon State Park near Philipsburg, PA not far from where he grew up. In lieu of flowers, donations may be sent in his name to the "Friends of Black Moshannon" at https://www.z2systems.com/np/clients/ppff/campaign.jsp?campaign=44 There will be a viewing at St. Kevin Roman Catholic Church (200 West Sproul Road, Springfield, PA 19064) on Saturday, March 19, 2016 at 9:30 AM, followed by a Funeral Mass at 10:30 AM. Immediately afterward, the internment, with military honors, will be at SS Peter & Paul Cemetery (1600 S. Sproul Road, Springfield, PA 19064).

The family of George J. Merva created this Life Tributes page to make it easy to share your memories.

Send flowers to the Merva family.