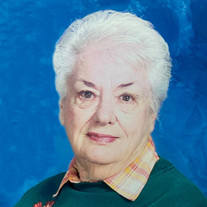 Frances Anne Guinan (née Luberto) of Villas, NJ passed away peacefully on April 15, 2022 at the age of 98. Frances made the most of her near full century on this earth, embracing social activities, hobbies, artistic ventures, dance routines, and performances well into her 90s. Born in Media, PA in 1924 to Daniel and Elizabeth Luberto, she spent much of her childhood in Southwest Philadelphia, attending Good Shepherd Elementary School and then West Philadelphia Catholic Girls High School from which she graduated in 1942. Professionally, Frances had a wide-ranging career beginning with nursing in the ER of Chester Hospital in 1947, which she later continued in the maternity ward of Delaware County Memorial Hospital. Outside of nursing, she had lengthy stints at the Transportation Department of Philadelphia Electric Company, as well as Hol-Gar, Boeing, and Equipment Corporation of America. In retirement, she became a volunteer with the Foster Grandparents Program in Cape May County working with pre-Kindergarten children in local Head Start Centers for eighteen years. In 2016, she was awarded “Volunteer of the Year” Award by Lower Township, NJ for her service to Head Start. Frances married the love of her life, Thomas F. Guinan of Drexel Hill, PA in 1960, with whom she spent 32 years and raised two daughters, Kathleen and Bridget. Having developed a deep fondness for the beach from a young age, she realized her life’s dream of living by the shore permanently, moving to Villas, NJ with her husband in 1983, where she spent many more summers at the beach in Wildwood with her visiting family. A gifted artist, Frances produced hundreds of drawings, paintings, embroideries, and crafts throughout her life, both personally and professionally, often under the moniker “Grey Fox”. Her interest in the arts did not stop there, however, as she was an active participant in Country line dancing troupes well into her later years. As a member of the St. John Newman Spirit Players in North Cape May she presented annual musical shows and, among other roles, Fran appeared as the “Tin Man” in The Wizard of Oz, “Mother Superior” in Sister Act and “Elvis Presley” in Movie Musical Memories. Recreationally, Fran loved playing Mahjong and sitting by the bay watching the Cape May-Lewes Ferry which she did frequently. She is survived by her daughters, Kathleen (Patrick) and Bridget (Michael); grandsons, Patrick (Melissa), Thomas (Jacki), Vincent (Erin), and Kevin (Mary-Kate); great grandchildren, Vincent, Ryleigh, and Zoe. She is predeceased by her husband Thomas; father Daniel; mother Elizabeth; and brother, John. Fran is also survived by her beloved tuxedo cat, Tom. Services are April 21st at Williams Lombardo Funeral Home, 33 W. Baltimore Ave. Clifton Heights, PA 19018. Viewing at 9:30AM, followed by service at 11:00AM. Burial immediately following at Philadelphia Memorial Park, Frazier, PA. Family asks that donations be made to animal rescue causes in lieu of flowers, per Frances’ wishes.

Frances Anne Guinan (née Luberto) of Villas, NJ passed away peacefully on April 15, 2022 at the age of 98. Frances made the most of her near full century on this earth, embracing social activities, hobbies, artistic ventures, dance routines,... View Obituary & Service Information

The family of Frances A. Guinan created this Life Tributes page to make it easy to share your memories.

Send flowers to the Guinan family.