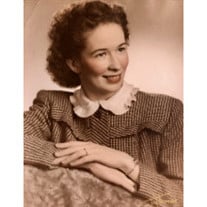 Eileen K. Ziegler (nee Kelly), 94, of Media, PA and formerly of Springfield, PA peacefully on June 18, 2019 at her home at Riddle Village. Formerly a long time resident of Springfield, PA. Eileen was predeceased by her beloved husband of fifty-two... View Obituary & Service Information

The family of Eileen K Ziegler created this Life Tributes page to make it easy to share your memories.

Send flowers to the Ziegler family.