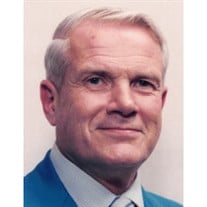 Donald R. Duck, Sr. 87, passed away on November 22, 2018, at the Coatesville VA Hospital in Coatesville, PA. Born in Philadelphia, Mr. Duck was a 1949 graduate of Springfield High School. He attended post-secondary plumbing school where he received his journeyman status and then his master plumber's license. He was a resident of Springfield for many years before moving to West Chester in 2002. He owned and operated Donald R. Duck Plumbing and Heating in Chester, PA for 36 years retiring in 1997. Mr. Duck was a long time member of the Blue Church in Springfield. He was an army veteran of the Korean War. As a member of the Plumbing Heating Cooling Contractors Association, he held numerous positions in the local, state and national chapters. Mr. Duck was a member of the Chester Jaycees. He was also awarded "Contractor of the Year" from the PHCC. He enjoyed model trains, camping and traveling, but most of all, cherished time with his family. He was also a member of the toy train museum in Strasburg, PA. He is survived by his wife of 66 years, Joan S. (nee Stewart) Duck, a son, Donald Robert (Victoria) Duck, Jr. of Brookhaven, PA, a sister, Alberta Hogg of Media, PA, three grandsons; Benjamin J. Farmer of Kirkland, WA; Donald R. (Emily) Duck, III of West Grove, PA and Andrew T. Duck of Brookhaven, PA. He was predeceased by a daughter, Marilyn Duck Farmer (Javier) Robles in May, 2018 and a sister Grenath Spohn in 1995. Relatives and friends are invited to his visitation on December 15, 2018, at 9:30 AM followed immediately by his funeral service at 11:00 AM at the Blue Church, 940 Baltimore Pike, Springfield, PA 19064. Interment will be private. Memorial gifts may be made to the American Diabetes Foundation, PO Box 15829, Arlington, VA 22215.

Donald R. Duck, Sr. 87, passed away on November 22, 2018, at the Coatesville VA Hospital in Coatesville, PA. Born in Philadelphia, Mr. Duck was a 1949 graduate of Springfield High School. He attended post-secondary plumbing school where he... View Obituary & Service Information

The family of Donald R. Duck, Sr. created this Life Tributes page to make it easy to share your memories.