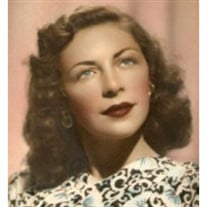 Mastragostino On January 24, 2017, Deva M. (nee Tomei) Mastragostino, passed peacefully in Sewell, NJ.  Born in Supino, Italy, graduate of South Phila. High School (1946), Deva married the love of her life, Louis S. Mastragostino in 1949.  She is survived by a son, Louis R. Mastragostino, two daughters, Deborah Mantella and Deva Cugini, eight grandchildren and one great-granddaughter.  She was predeceased by her husband, Louis, a brother, Vincent Tomei, and a sister, Rita Lazos. Relatives and friends are invited to her visitation on Saturday, January 28, after 10:00 am followed immediately by her funeral Mass at 11:00 am at St. Kevin Church, 200 W. Sproul Road, Springfield, PA 19064. Inurnment will be in Holy Cross Cemetery, Yeadon, PA.

The family of Deva M. Mastragostino created this Life Tributes page to make it easy to share your memories.

Send flowers to the Mastragostino family.