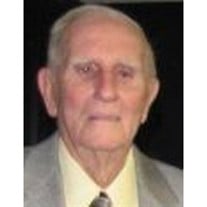 Charles S. Mowbray, Jr. Mr. Charles S. Mowbray, Jr., 92, died on December 9, 2017, at Taylor Hospice in Ridley Park, PA. Born in Philadelphia, PA, Mr. Mowbray was a graduate of West Philadelphia High School. He was a resident of Springfield since 1958. He lived in Glenolden and Philadelphia before moving to Springfield. He was employed by Bell Telephone as a lineman, supervisor and instructor in Philadelphia and West Chester for 35 years. Mr. Mowbray was a member of St. Matthew Lutheran Church in Springfield. He was a decorated Army veteran of WWII where he served in Europe with the 100th Division, Company E, 398th Infantry Regiment. Mr. Mowbray was devoted to his family, especially to his youngest son, Donald. He leaves behind a legacy of strength, humility and kindness. He is survived by three sons, Charles S., III, of Wyomissing, PA; William J. (Amy), of Lancaster, PA, and Donald R. Mowbray, of Springfield. He is also survived by 4 grandchildren, Kara (Joel) Williamson, Marcia, Matthew, and Anabella Mowbray. He was predeceased by his wife, Catherine Mowbray and a sister, Mary LeBon. Relatives and friends are invited to his visitation on Wednesday, December 13, after 11:00 AM at the Kovacs Funeral Home, Inc., 530 W. Woodland Avenue, Springfield, PA 19064 followed immediately by his funeral service at 11:30 AM. Interment will be in Arlington Cemetery, Drexel Hill, PA. In lieu of flowers memorial gifts may be made to St. Matthew Lutheran Church, 400 Lynbrooke Rd., Springfield, PA 19064 or to Taylor Hospice, P.O. Box 147, Ridley Park, PA 19078.

The family of Charles S. Mowbray, Jr. created this Life Tributes page to make it easy to share your memories.