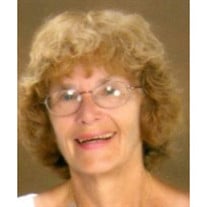 Barbara O'Connell McGurk, age 75 and longtime resident of Springfield, died peacefully on May 13, 2017. A kind-hearted woman whose exceptional compassion was equaled by her vast intellect and comically huge vocabulary, Barbara was deprived of many golden years by Alzheimer's Disease. But she was blessed to pass away surrounded by family in the comfort of her own bedroom, which was filled with beautiful flowers and soothing music and so much love it couldn't all fit in one room. Barbara was born in July 1941 in Southampton, NY, to Katherine and Joseph O'Connell, who served in the U.S. Army and survived World War II only to be killed in a military accident soon after coming home. As a teenager she lived on U.S. military bases in Germany for three years before returning to New York, where she was class valedictorian of Southampton High School in 1959. She earned a full scholarship to Syracuse University (class of '64), where she joined the honor societies of Pi Kappa Phi, Alpha Epsilon Delta, and whatever other smartypants groups they had. Barbara moved to Philadelphia and worked in the ICU at Hahnemann University Hospital. A doctor introduced her to John McGurk, a U.S. Navy veteran and former Philadelphia policeman who would be her devoted husband for 51 years and tenderly care for her, literally by her side, every single day as the Alzheimer's took away everything - except for love. A fitness enthusiast who walked 40 miles a week, Barbara was meticulously organized and an avid fan of classical music. She loved lists and Lizst - but Roy Orbison was her all-time favorite musician. She owned a painting of the Vietnam Veterans Memorial that still made her cry after 25 years. Barbara enjoyed a long career in nursing, primarily in retirement homes such as Dunwoody in Newtown Square and St. Ignatius in west Philly. She often went to patients' funerals, because for her, caring for others wasn't just a job. It was a passion. Barbara regularly volunteered at her children's and grandchildren's schools and devotedly attended their sporting events, shows, recitals, etc. She woke up at "Oh-Dark-Thirty," as she called it, for her son's early morning altar boy gigs and her daughter's horse shows. She cherished being a mom and even more so a grandmom to the four heartbroken children who will miss her dearly. The family fun in Sea Isle City will never be the same without her. Barbara is survived by her husband John; children Caitlin (Lance) Gardner and John (Maureen) McGurk; grandchildren Lianna and Kevin Gardner and Carlyne and Keenan McGurk; siblings Patricia (Mike) Fowler and James (Anita) O'Connell; and various other family. The family would like to thank Holisticare Hospice for treating Barbara with the empathy, dignity and respect she deserved in her final days. Family and friends are invited to celebrate Barbara's life on Saturday, May 20 at St. Kevin, 200 W. Sproul Rd in Springfield, for 10 a.m. visitation and 11 a.m. mass. In lieu of flowers, Barbara would appreciate donations to the Alzheimer's Foundation of America (www.alzfdn.org), and condolences may be left at www.kovacsfuneralhomeinc.com. Inurnment will be private

Barbara O'Connell McGurk, age 75 and longtime resident of Springfield, died peacefully on May 13, 2017. A kind-hearted woman whose exceptional compassion was equaled by her vast intellect and comically huge vocabulary, Barbara was deprived... View Obituary & Service Information

The family of Barbara O'Connell McGurk created this Life Tributes page to make it easy to share your memories.

Send flowers to the McGurk family.