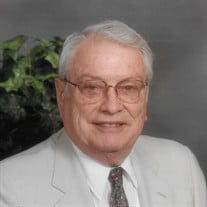 Arthur J. Griffith, Jr., 97, long-time Pennsylvania resident most recently at Lima Estates, died peacefully on February 11, 2022. Born November 6, 1924 to Arthur J. Griffith and Mary (Abrams) Griffith, Art spent his first ten years in Runnemede, NJ, where he enjoyed rural family life with his parents, younger brother (Don), and cousins next door. His family moved to Glenolden, PA in 1934, where he lived until his high school graduation in June 1942. Art volunteered under the U.S. Army draft and received orders to report on March 3, 1943 for induction. He served the United States from 1943-1946, first as a member of the 106th Division Signal Company. His ability to type – a skill he acquired as a result of his father’s encouragement to take high school courses that would allow him to go right to work after high school – secured what he considered “the best job in the whole company” as a member of the supply group. Following this post, he held assorted assignments in smaller signal corps companies including repair companies, depot companies, and finally a machine records unit responsible for maintaining the records of many soldiers using IBM punch card equipment. After being discharged from the army a few short months following his marriage to Elizabeth Hipple, Art returned to civilian life in Ridley Park, PA. He enrolled in night school at Drexel Institute of Technology under the G.I. Bill, going on to earn a Bachelor of Science degree for business in 1955. At the same time, he resumed his professional work in the Philadelphia area and started his family, which grew to include three children born between 1951-1956. His young family enjoyed many vacations and weekend visits to a seashore house in Surf City, NJ owned by Art’s parents. Art’s working life spanned 60 years (1942-2002) across a variety of industries. He spent many years in the newly emerging computer field, holding positions in sales and systems for Burroughs Corp., which eventually merged with Sperry Corp. to become Unisys. His final job, which he held for ten years, was as Treasurer for Westminster Presbyterian Church in West Chester, PA. He always said he enjoyed every minute of this job, and made a number of improvements such as putting payroll on the computer and automating many of the procedures, skills he brought with him from the previous 50 years of his working life. As a true lifelong learner and curious soul, Art traveled to far-flung locales including Grand Cayman, Jamaica, Cozumel, Bermuda, Baja, the Mediterranean, Russia, Finland, Alaska, the San Juan Islands, the Panama Canal, Costa Rica, and Spitsbergen (600 miles from the North Pole). He enjoyed Philly Pops concerts, performances at the Playhouse in the DuPont hotel, and dining in Philadelphia and West Chester restaurants with his late wife Doris. Throughout his long life, Art also enjoyed visiting the Jersey shore, especially Ship Bottom and Surf City on Long Beach Island; wildlife watching; raising cats, especially Himalayans; watching the Phillies; eating milkshakes from the Dairy Cottage; sharing family dinners; and participating in church activities and committees. He challenged his family to strive for excellence in all they set out to do. Arthur was predeceased in 2003 by his wife of 21 years, Doris Hourihan. Survivors include three children: Nancy Walls (David), Jim Griffith (Amy Katchur), and Glenn Griffith (Marie Caranci); two stepchildren: Jenny Hourihan (John Balin) and Timothy Hourihan; eight grandchildren; five great-grandchildren; and extended family and loving friends. His survivors are very appreciative of the excellent care he received at Lima Estates, and wish to thank everyone who visited and/or corresponded with him in his later years. Memorial Service will be private. Interment will be at Washington’s Crossing National Cemetery in Bucks County, PA. Contributions in Art’s memory may be made to the Colonial Pennsylvania Plantation’s Animal Fund or to a charity of your choice. Arrangements by Kovacs-Lombardo Funeral Homes.

The family of Arthur J. Griffith Jr. created this Life Tributes page to make it easy to share your memories.

Send flowers to the Griffith family.